Board of Trustees Monthly Meeting

What can you​ do to help?
Click here for information on keeping your sewer lines free from blockages,
& how to help keep your sewer fees down. 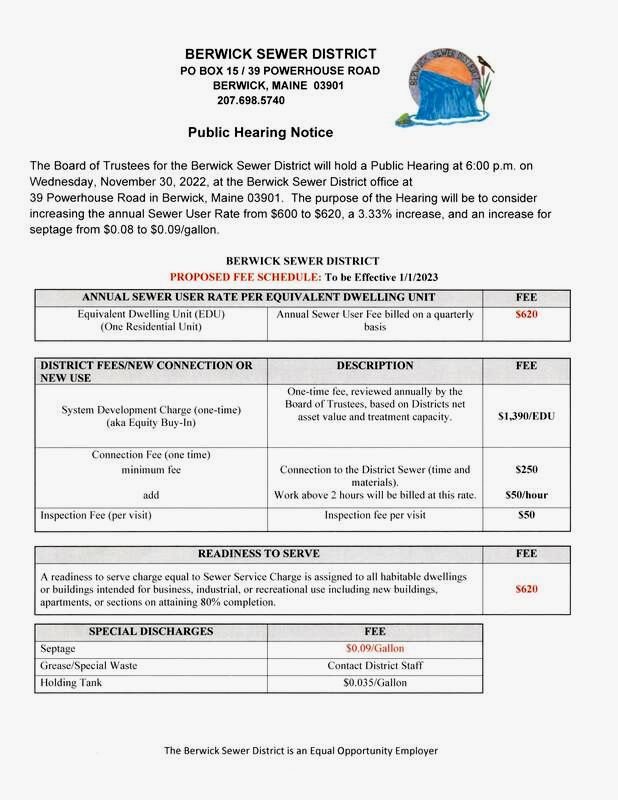 In 2019 the Berwick Sewer District Trustees adopted a commonly used and approved method of calculating a cost to connect the equivalent of one dwelling unit (EDU) to the District’s treatment system with the intent to periodically revisit the calculation to reflect changes in the parameters affecting its calculation.
​
ANNOUNCEMENT:  Following a public hearing on July 27th the Berwick Sewer District Trustees voted to change the Districts System Development Charge (Equity Buy-In Fee) from $368 per Equivalent Dwelling Unit (EDU) to $1390 per EDU, Effective January 1, 2023. Considering the District’s current treatment capacity established by a recent Wastewater Treatment Facility (WWTF) Evaluation conducted by Underwood Engineers (UE).  The Trustees called for the evaluation at the beginning of 2022 for the following reasons.

Background and Purpose of the WWTF Evaluation: In 2020 the Maine Department of Environmental Protection (MDEP) issued a Clean Watershed Needs Survey (CWNS), to identify potential projects in Maine should national infrastructure funding become available. Underwood Engineers (UE) coordinated with the Berwick Sewer District (BSD) to identify potential projects, including WWTF Improvements to address anticipated total nitrogen limits and submitted the needs survey to MDEP on behalf of the District. In early 2022, UE evaluated existing and future conditions to establish what WWTF upgrades more specifically would be needed and explored possible sources of funding. UE used flow and load data from 2020 to 2021 as well as future estimates to update the BioWin model assumptions to confirm proposed design parameters for the WWTF upgrades.

System Development Charge (SDC) Background:  As a result of the evaluation the Engineers noted that the District’s treatment capacity is currently 290,000 gpd (gallons per day) and not 1,100,000 gpd, the Districts NPDES permit limit, that was previous assumed in the fee calculation.  Reasonably, following the loss of treatment flows from Prime Tanning the District had re-designed and developed a smaller, more economical, and effective treatment train within the Existing WWTF to meet permit limits and maintain reasonable costs to its users.

​Have unwanted medications?  DON'T FLUSH THEM DOWN THE TOILET.
​MedReturnME is a free and anonymous drop box program in York County where you can drop off any unwanted medications: prescription, over-the-counter, drops, ointments, and veterinary medicines.
The local drop box is located in the lobby of the Berwick Police Department. Before dropping off medications, remove any personal information from the label. For more information, please contact the Berwick Police Department at (207) 698-1136.
​ 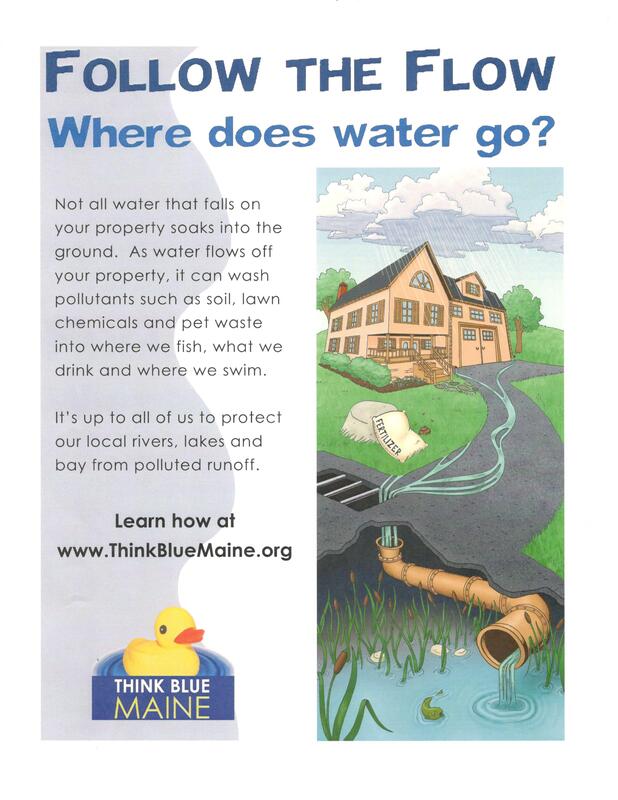